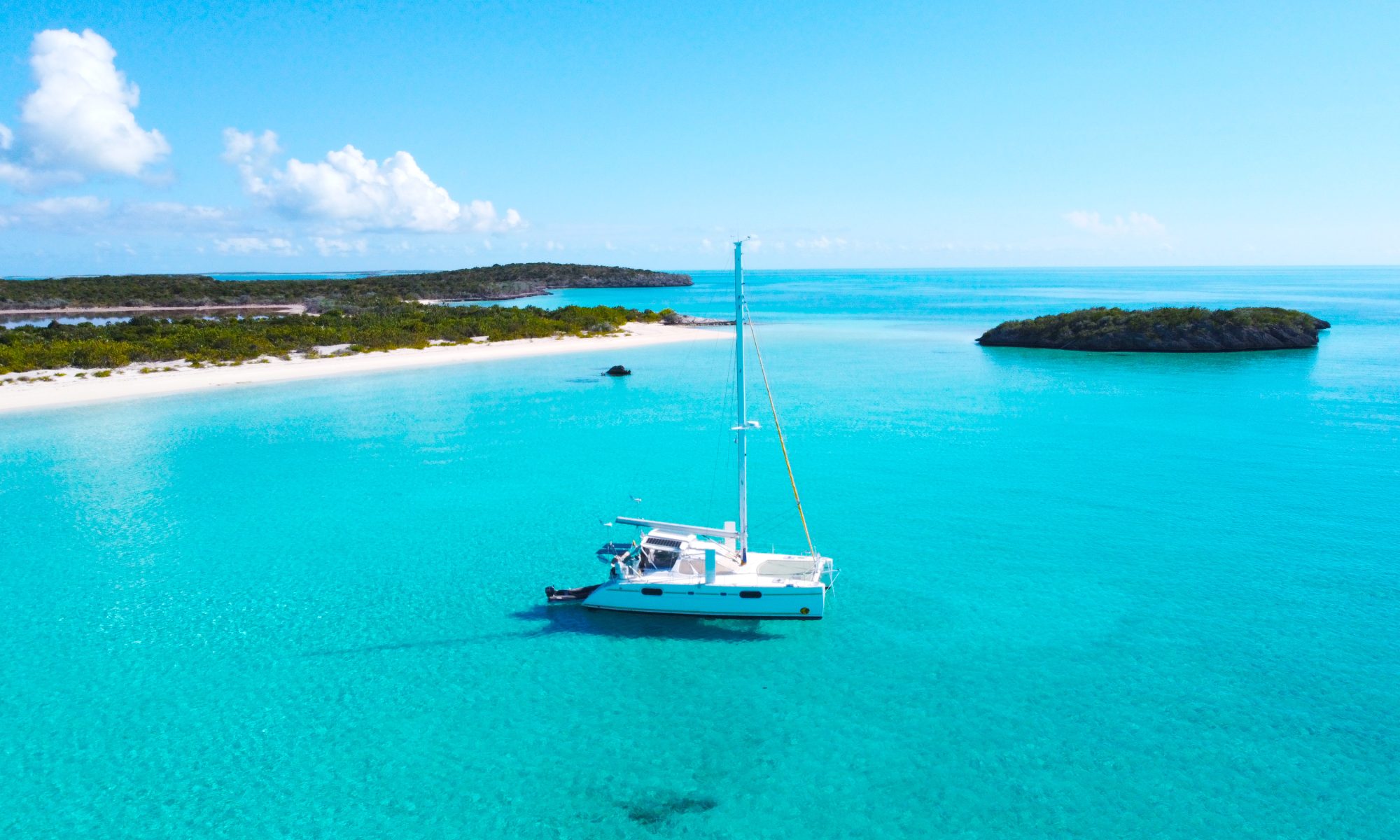 The anchor came up at 0640. Trouble was headed to Buena Vista today. It is about 29 nm, so it should be an easy sail. I decided to troll a couple of fishing lines. Previously I had lost all my good lures, so I cobbled a couple together from some bits and pieces I had in my tackle box. Restringing the reels with new lines and added steel leaders to my questionable-looking lures, hoping this would not break like last time.

One of the rods got a big hit. I tried to slow the boat down, but the wind was piping up, and Trouble really does not like to slow down, no matter how much I let the sails out.

Hoping it was a Wahoo, but it turned out to be another large Barracuda. I was able to land him and save the lure. As the Barracuda slid back into the water, I set the rod again out.

The wind was really picking up and I was transiting by the Jamaica Cut. Before the little Cays would block the big waves. This stretch didn’t have any cays to block the waves. Going by this cut the waves got pretty big. Reaching over 7 feet and Trouble screening along at 9 knots, it was a bouncy rough ride. Of course, right then, I got another hit. Again I tried to slow Trouble down as it was almost impossible to reel in whatever I caught. I got her slowed down a little, but we were still moving fast and bouncing over waves.

As I got the catch closer to the boat I saw that it was NOT a Barracuda. I landed this fish, gave him some cheap rum in the gills to stop him from flopping. I went to get the lure out and the lure just popped off the snap ring and fell into the water. Another lost lure! But, I kept the fish. I looked him up on my “Fish Chart” and it seemed to be a Blue Runner. It was edible so I put him in my bucket to fillet later as the boat was bouncing around too much to be pulling knives out.

Trouble got hailed on the radio during my landing of the fish, asking what my intentions were. I had seen the sailboat in the distance and was keeping an eye on him. He had the right of way and was just making sure I knew that. I told him I’d take his stern so he didn’t have to worry about me crossing his bow (Translate: I’d go behind him instead of crossing in front of him.) Also, I looked up the mast and saw VHF antenna was also wobbling all over the place looking like it was about ready to fall off the mast. I’d have to deal with that soon.

Trouble pulled into Buena Vista Cay and had her anchor down before noon. The Blue Runner was very stiff by the time I got to filleting him. I probably should have bled him out in the bucket, which might have helped. I filleted the Blue Runner as best I could and had fish Tacos from the scraps for dinner.

Before dinner, I went and explored Buena Vista. There is a house with its roof that was blown off in hurricane Irma. Ed the sole occupant of the cay left after that. That night was eerie as someone had left some solar-powered Christmas lights on the beach. Being in a remote area with no other lights and this weird light show going on, on a deserted island, was a bit unsettling.

There was no internet at Buena Vista, and I wanted to move on. I moved Trouble about 10 nm to Raccoon Cay. Trouble pulled in close to share next to a couple of other catamarans that I had met in my travels. I gave “s/v Reach” a call on the VHF and asked Mark if he could come over and give me hand hoisting me up the mast to see if I could fix my flopping antenna. Troubles large electric winch made taking me up the mast fairly easy for Mark. I grabbed all the tools I’d thought I needed and Mark took me up the mast. I was expecting the worst but it was only a loose nut. After tightening the nut and giving it a quick once over I was done… for now.

I bummed around some old ruins on Raccoon Cay and hung out there a couple of days. I went and looked at a Blue Hole with another boat called “LabMariner“. The Blue Hole was not much to see.

March 1st was the opening season of Nassau Grouper and I had a mission to nab one on the first day. The wind had really settled down and after being scarred off one dive by a 7′ bull shark and another dive with another pack of Barracudas, I was really looking forward to not being prey.

There was a nice reef rock edge that is normally not safe to get to, but the wind was nonexistent with no waves. Jumping in I was on the hunt. I shortly found a nice Nassau Grouper keeping an eye on me. Diving down slowly I got to within shooting distance and took the shot. I missed! He scurried into a crevasse. I got my spear pole ready and dove down to the crevasse, stuck my head in and there he was. I took another shot and missed AGAIN. Down again I go. He is still in there. I missed a third time also. By my fourth dive on him, he had gone way back in the hole I couldn’t get to him anymore. Dejected I headed back to Trouble.

Slow morning but I wanted to get to Hog Cay. Another big blow was coming and I wanted to get situated and ready for it. I ended up anchoring in the same spot I was last time I was down here. Raccoon to Hog was a short sail, about 5 nm. The anchor was down by 1055.

I was able to get out hunting and went to a spot I was at the last time Trouble was here. On the first dive, I had a lobster within 15 mins. My hunting ego came back a little. I went back to the boat for lunch and went to the Tiki Hut – Hog Cay Yacht Club for sundowners.

I meet up with Jim on “LabMariner” and we went out spearfishing for two days and struck out both days. My spearfishing skills need some work.

The big blow was here. Hog Cay filled up with all the boats nearby in other unprotected cays. It was a quiet birthday for me. I made a German Chocolate Cake but forgot the frosting. I little dark rum over it would surface. A recommendation from Mr. Parker. The lobster was the main course.

I was going to get out of here after the blow, but I’ve decided to hang out for another week. Maybe go practice my Spearfishing skills. Of course, another big front is coming in a week. But I’ve weathered a few her ar Hog Cay so I’m pretty accustomed to the routine.