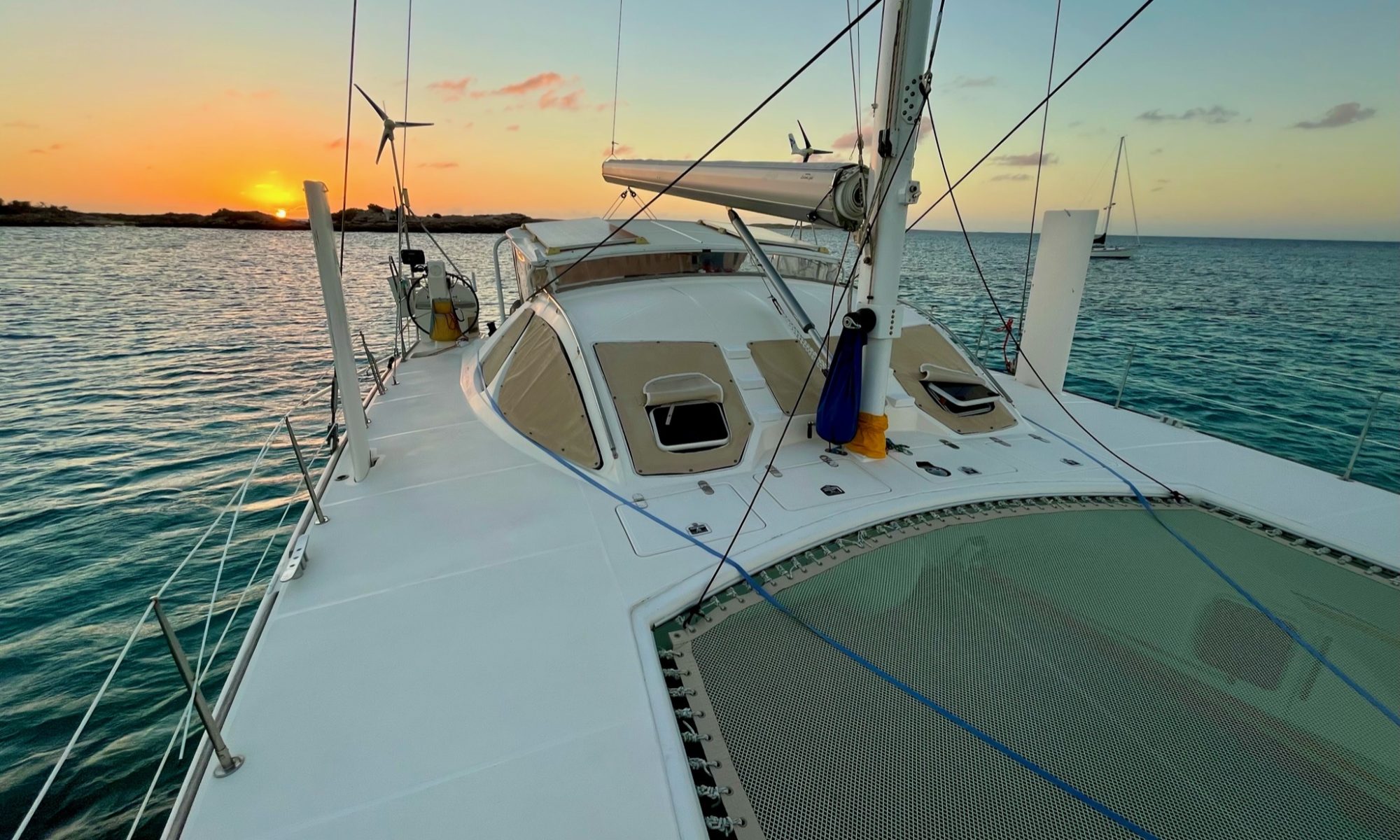 Trouble was running low again on veggies and snacks. So while planning an exit out of the Raggeds to George Town, I wanted to try a few shortcuts. One was the notorious Hog Cay Cut, which can save you at least four hours. But what it really does, is save you a day, as usually you would head to Long Island first. Going through the cut needs timing with high tide, and is only usable by shallow-draft boats. The other shortcut was the Jewfish Cut and Pudding Cut, which puts you into Lee Stocking Island. But before all that I wanted to make a stop on the way out.

My stop for the day is only a short hop from my current location. Johnson Cay is small with a small horseshoe-shaped bay. Only a few boats can anchor in this scenic anchorage. It is only safe on calm days with a south component wind. I pulled in with no other boats.

After I had some lunch I went out to do some spearfishing in this location. I found what looked like a nice reef. I got in the water and did some hunting. In a short time, I saw a large Nassau Grouper in a rock hole. I still have not speared on yet, but I was determined to get this one.

The reef is a bit deeper than I like to hunt in. I went down deep came up on the hole took my time with my aim. Right when he looked at me, I let the pole spear go, and hit him hard. He yanked my spear pole and went back further in the hole with it. I couldn’t yank him out. I had to drop the spear as my lungs were burning to get some oxygen. Even though I was down deep and my adrenaline made the trip to the surface easy. I wanted my pole spear back and more pressing I wanted that grouper.

I tried a few more times to go down and try to work my spear pole with the grouper, out of his hole. He had wedged himself firm in that rock hole. I was making so much commotion the barracudas came over to see what I was doing. I tried to scare them away, but without a spear pole in my hand, they didn’t seem to care. They wanted my grouper, so I had to get the grouper and or my spear pole back quick.

I went down determined to just that pole out with all I had. I went down grabbed the pole and wedged my foot on the rock for leverage and yanked hard. On about the third yank it came free and I saw to grouper dart off to another hole. I’m sure he was injured badly and the barracudas would go after him. Dejected again, I decided to give up on this location.

I headed off in the dinghy to a few rocks on the outside of Johnson Cay. This area was hunted by me for a bit, but it seemed pretty barren. The dinghy was pretty far when I spotted a small rock reef. I’d do a quick check before heading back to the dinghy. I dove down and in a small hole on this small rock was a monster-sized lobster. After my failure earlier I was going to take him no maker what.

On my first try, I fired a bit too early and missed. How I missed that monster I don’t know. But lobsters are not very smart and usually don’t take off if you miss them. Sometimes they even come out of their hole. I went down a second time trying to stay calm and got real close before letting the spear pole go. A nice hit in the face, but he took off deeper in the hole and took my spear pole. I had to drop it to get air. Not again! It was not as deep as last time so I would go down and gently try to wiggle that Kraken-sized lobster out of that little hole.

Finally, I was able to wiggle him out and he was huge. At least the biggest I’ve ever caught. The swim back to the dinghy was long and against the current. Trying to hold this heavy lobster out of the water and swim back was very tiring. I was a little worried I lose him as he thrashed about. When I got him in the bucket I was a bit relieved. I had to rest a bit before I headed back to Trouble to process this monster.

After a great sleep and Trouble prepped for travel, I got underway for Water Cay. Water Cay is about 51nm and I had a southeast wind pushing me the whole way. It was a fast sail and I pulled into Water Cay 1400 hours (2 pm).

After anchoring a fellow cruiser came over to chat. Cal from Carpe Vita chatted for a bit as he had traveled with a few of the other Catanas (Catana is the brand Trouble is) owners I’ve met. Cal was headed out of the Raggeds via the notorious Hog Cay Cut. I was planning to try the Jewfish/Pudding Cut route but changed my mind after seeing that the winds would leave me stuck in Lee Stocking for a while.

I hailed Cal later and made plans to head out together in the morning. Hightide was going to be a bit earlier than what we could make it there by, but we hoped we’d be OK. Both Cal and I had never been through the cut before.

Cal had his anchor up and out of Water Cay at pre-dawn. I was shortly behind him along with a Monohulled boat. We all had our sails up quickly with a full reef as the wind was brisk.

Trouble passed Carpe Vita shortly after I had the sails trimmed. The Monohull was left in the dust as the catamarans were in their element on a reach. I was a few miles ahead of Carpe Vita when I got to the shallow areas before the “Cut”. I got the sails down and the engines started waiting for Carpe Vita to catch up. The monohull was going to Long Island.

I lead the way through the shallow water, calling off depths readings for Carpe Vita. Last year I would have been really nervous. This year I’ve got pretty good at visually reading the water depths ahead. Trouble got through the shallows OK and headed into the cut which was deeper, but narrow with rocks on either side along with a swift current trying to push you into the rocks. The cut is “S” shaped and I just kept Trouble in the middle as best I could. I called out a few problem spots for Carpe Vita. We both made it through the cut without problems. Carpe Vita wanted to get to George Town quickly so they motorsailed while I put all my sails up and enjoyed the nice downwind sailing.

Trouble pulled into busy George Town and had her anchor down at 1330 (1:30 pm). I ate lunch and headed into town to start provisioning. I loaded up at the Exuma market and got back to Trouble and unpacked before 1600 hours. Cal and Marty called me on the radio and invited me over for sundowners. We chatted about “The Cut”, Cals Rally car racing days, and photography which Cal & Marty had also been in the business.

Day two provisioning started with fuel then the Shop Rite on the other side of Lake Victoria. On the way back I stopped at the local market and picked up some fresh bakeries, peppers, tomatoes, and unrefrigerated eggs. I asked for eggs from only happy chickens. She went on to tell me ALL about her chickens. It’s always fun to chat with the locals selling their goods.

George Town has twice as many boats as at Christmas and three times as last year. While I like George Town I was already missing the solitude of the outer islands. So I was prepped to pull anchor the next day and head to Lee Stocking Island then out the back way through Pudding/Jewfish cut. But that will have to wait till my next post along with more lobstering.