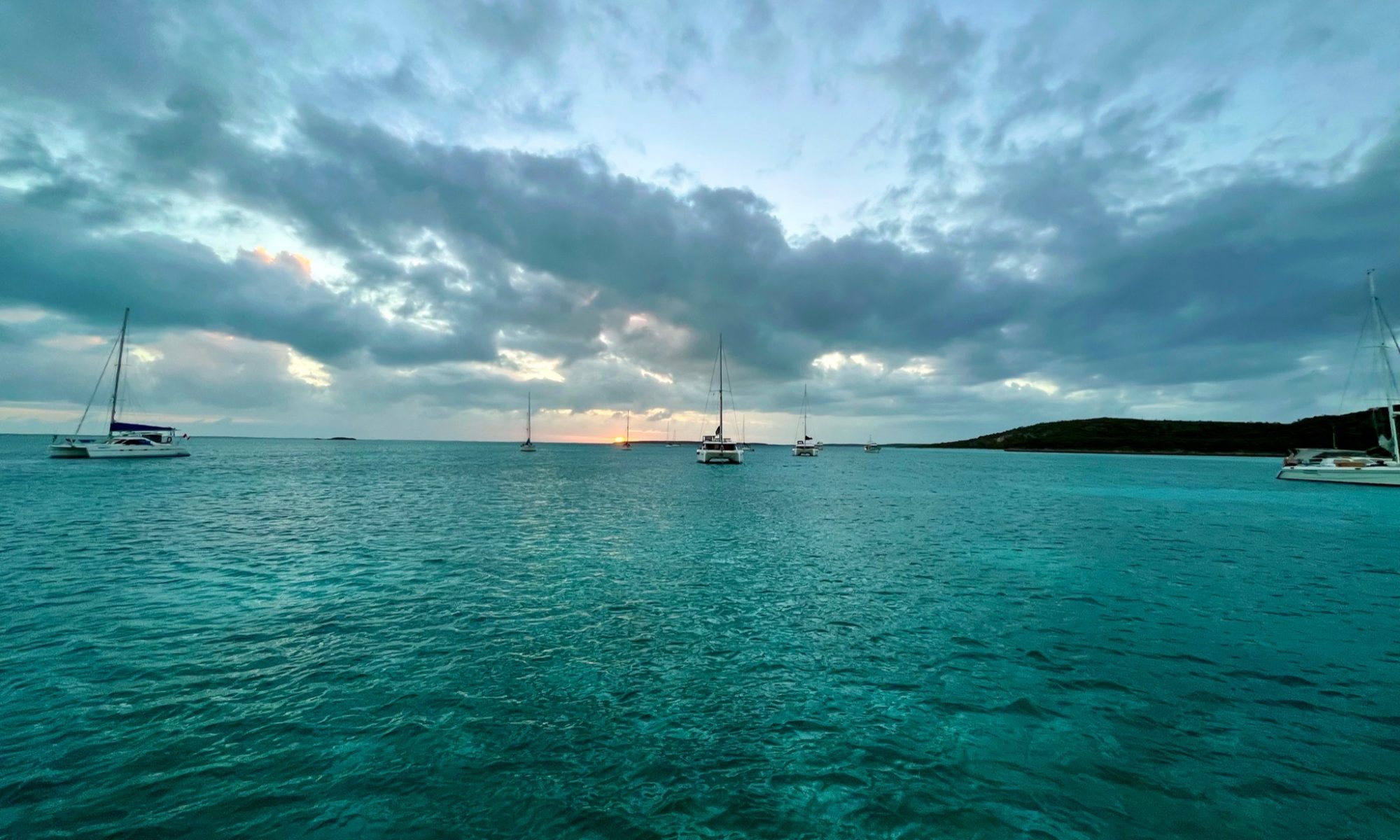 After provisioning and jugging fuel to Trouble I was ready to get out of town and head back to the Raggeds. I wanted to try the backway through Pudding Cut. To do that I needed to stop at Williams Bay, Lee Stocking Island. Last season I stopped here quick a few times, so I was familiar with the route. Lee Stocking was also the spot for my first lobster kill last season and the first lobsters of this season.

The sail was uneventful except for a rouge sailboat that was following me a little too close. I thought for sure the lure I was trolling was going to catch a sailboat. He peeled away after I think he noticed I was trolling.

Sails down and engines on to head through Rat Cay Cut and the beautiful ride to Williams Bay. This route weaves through shallow waters to what is usually a remote anchorage. Last season and the beginning of this season only a few boats were ever here.

As the anchorage came into view I was amazed to see over two dozen boats anchored here. I guess the word got out about this spot. Doing a little “Flexing” I weaved Trouble through the pack to in front of all the other boats and dropped anchor in pretty shallow water. I was later “Out Flexed” when another boat came in and anchor in front of me in even shallower water. Of course, it was another Catana ( Troubles make ) so I wasn’t too surprised.

The next morning I was off to do some hunting. On my list was still trying to get my first Nassau Grouper. I went to the spot where Pete and I had luck at the beginning of the season.

First checking the rock we found lobster last year, I came up empty. I then swam a bit further out and quickly saw a Nassau Grouper. All right, deep breaths, relax, and go down to get him. I had him lined up and was sure I’d get him. Just as he looked at me I shot him, but he bolted at the same time and I missed again! I scouted around trying to find him again, but I had no luck.

I was about to just give up on this spot and head back, but I went down and looked under a small rock and there was a lobster just staring at me. Well, I have to get something today to keep my manhood. I went down and calmly did a nice shot and nabbed the lobster. Getting back to the dinghy and I cleaned it on the spot. I figured less mess on Trouble.

Grilled lobster for dinner. This was the first time I tried to grill a lobster tail. It worked pretty well and paired nicely with asparagus and a Kalik beer. Not a bad day. I made sleep early as I had to get up early to get through Pudding Cut at high tide.

First time on this route to Flamingo Cay in the Jumentos. The route goes out the backside of Great Exuma and uses Pudding Cut and Jewfish Rock Cut. To get to Pudding cut from Williams bay the normal, safe route is a big loop. I decided to take a shortcut on the West side of Pigeon Cay. This is not a normal route used by cruisers but some of the paper charts show it as being fine.

My plan was to take it slow and it looked too shallow I’d just go around and do the big loop. This shortcut turned out to be a non-event. Next on the list was to get through Pudding Cut. The digital chart and the paper charts showed two different routes to take. I picked the paper charts route. Coming up to the choice of going either left or right, I noticed the route I picked looked a bit shallow. I decided to trust the paper chart and stay on course. Wow, I was wrong. I took Trouble over a very small shoal that I just barely cleared. It seems this shoal was new. I took note not to use that side next time.

Pudding Cut was uneventful except for the shoal before it. I cleared it and was on the Bahama Banks. Troubles sails went up and I was having a great broad reach sail. Jewfish Rock Cut was next on the list.

This cut is narrow with swift currents. For a safe passage, I would normally drop the sails and motor through it. I decided NOT to drop the sails. Trouble was having a great time in this perfect wind, I didn’t want to slow her down. I compromised and turned the engines on in case I needed to do any quick maneuvers. While the cut was tight, I had no issues, and once cleared I got Trouble cranked up as I had a bit of miles to make today. Trouble was cooking along at 8-9 knots all day, and what normally would have been a long day doing 60 nm, we got us into Flamingo Cay by 1600 hours ( 4pm ).

I was up early to depart South, to Double Breasted Cay in the Raggeds. Flamingo Cay had a few other boats but most were headed North. Today was going to be another great sailing day. I settled Trouble in and we were making great time. In no time we were already at Double Breasted. 1230 — anchor down with no one else in Double Breasted. One other boat pulled in later in the day. They came over to say hi and we made plans to go out and do some hunting the next day. But more about that next post.