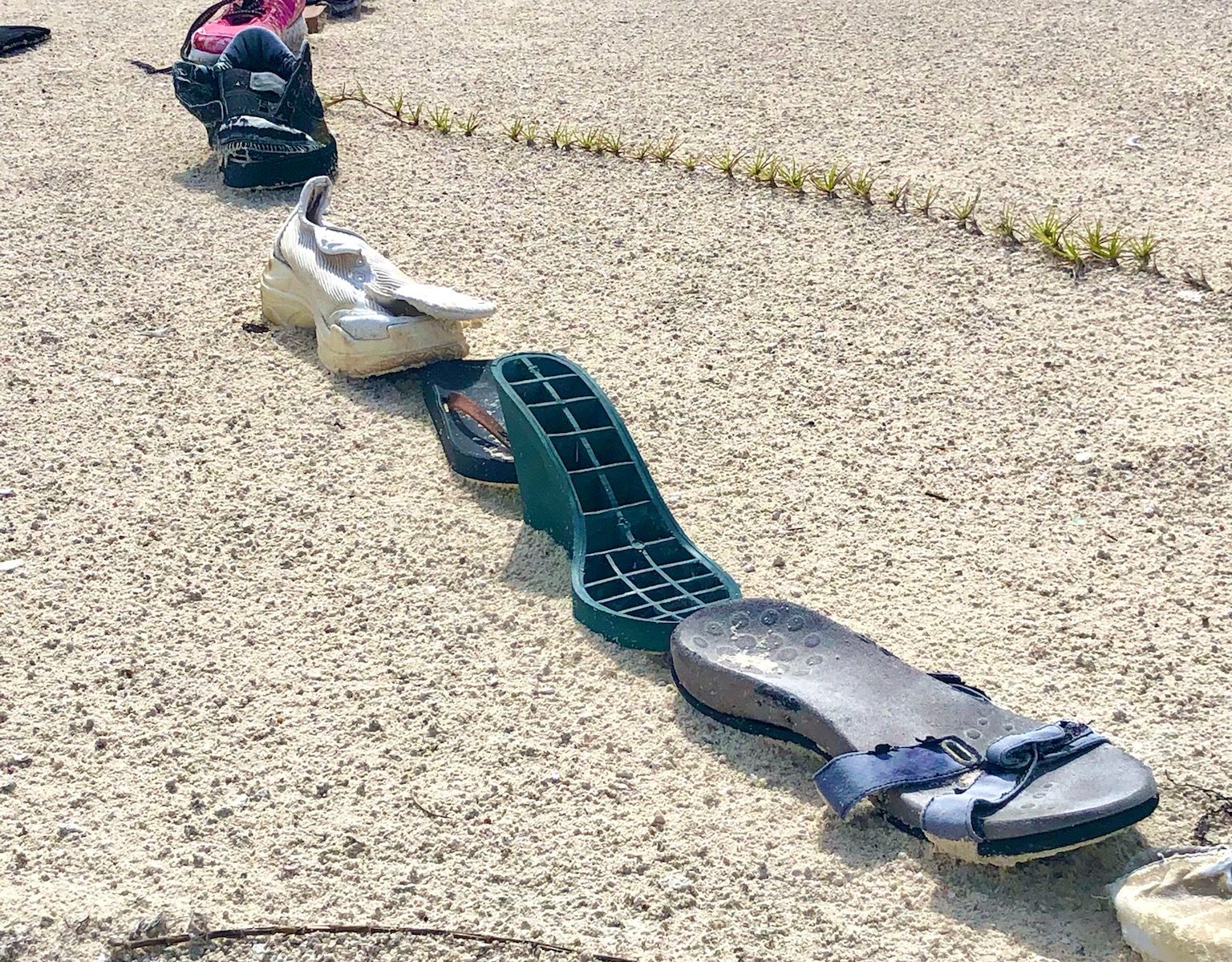 It has been over a year since I’ve anchored at Double Breasted. Last season this was as far as I made it, into the Raggeds. I got off the boat to a walk on the far side of Double Breasted. This side of the island, like all of them down here, is littered with flotsam. Some other people had created a few art projects from the trash, making for a fun walk.

As I rounded a cliff on the walk I ran into an old structure I had created last season. I laughed out loud as a lizard had taken to the top. Last season I had run into this large piece of wood, so I had dragged it way up the beach so the ocean would not reclaim it.

After my walk, some cruisers, Brown & Eileen on Blown Away, came by to say hi. We made plans to go out and do some Pole Spearfishing the next day.

I picked up Brown in the morning to go find some dinner. We went on the outside and anchored in the swell. The reef was pretty deep, about 25 feet. Brown didn’t bring a pole so he said he’d go spot lobster and fish for me. There were a lot of fish, and he quickly spotted a Nassau Grouper. My nemesis, the Nassau Grouper, eluded me once again. The dives were deep and it was sometimes hard to clear/equalize my ears properly.

After a missed lobster, Brown spotted another one. Needing to claim my manhood again, I dove down calmly, clearing my ears as I went down, and nailed that lobster. After a catch, you are more confident and calm as you know you already have at least one. Brown spotted another Nassau Grouper for me, which I dove down calmly, a little below the grouper, and rolled to my side a bit with my fully sprung pole spear. I sighted down the pole, and right when the grouper looked at me I released and hit him squarely in the back. My nemesis was finally struck down.

With one lobster and a grouper, we were pretty excited. Brown found another lobster. I gave the pole spear to Brown and said “You’ll feel much better after you go kill something.” He snorted a laugh and proceeded to go give it a try with the pole spear. The beauty of spearing lobster, is they don’t usually take off after you miss them. So after a few misses, I pep-talked Brown to go slowly. He dove down like a pro and took his time with his shot and nailed the guy. It looked like a rain squall line was moving in. With 2 lobsters and a grouper, we called it a day.

We got back to “Blown Away” and cleaned the catch along with Brown showing off the catch to Eileen. We made plans for dinner with the catch, but the front with rain squalls came in and was not letting up, so we planned to do dinner another night.

The next day the front brought in North winds and made Double Breasted a bit rolly. So “Blown Away” took off to Raccoon Cay, and “Trouble” followed shortly after. It was still raining, so it was a wet ride of only 4 nm. Racoon was not much better and the rain kept up through the day. So dinner was put off again.

After a bumpy night at Racoon, I decided to go around the corner to a small bay called “Man O War Bay”. I made a quick call on the VHF radio to a boat I could see on the AIS (Automatic Identification System) that was anchored there. They confirmed that it was not rolly. I pulled into Man O War Bay, and dropped anchor before 0825 (8:25 am).

There was a nice reef just outside a cut above Man O War Bay. I went over before lunch, dropped anchor and dove on a spectacular reef, with large Elkhorn Coral and lots of fish.

After swimming around a bit and not seeing any lobster, I spotted a Hogfish. I had never seen a Hogfish before but knew they were prized eating. Still having confidence from the previous hunt I dove down and calmly took my shot and nailed him like I a pro.

I decided to get back to the boat and clean my catch. I had Hogfish for dinner and it was AWSOME. Hogfish is now my new favorite eating fish.

Man O War is a nice anchorage but only in a North or northwest wind. The wind was clocking to the east. I radioed “Blown Away” that I would head back to Racoon in the morning and we would go out again to do some pole spearfishing.

In the morning I moved Trouble back to Racoon. The swell had calmed with the shifting wind. Eileen and Brown picked me up to go do some more pole spearfishing. I brought an extra one for Brown. Eileen was going to do some filming.

We went to the reef at Man O War but the swell was huge and too dangerous to anchor the dinghy on the outside. We anchored it in the bay and swam out the cut. It was a rough long swim. I was not looking forward to swimming the catch back to the boat. So I would be selective in what I shot at. Eileen was great at spotting lobsters and Brown quickly got one and Eileen pointed one out to me that I went and got. The swim back to the dinghy was long and rough, trying to hold onto a big lobster.

My Last Lobster of The Season

With two lobster in a short time, we swam back out through the large swells. I saw a Hogfish and took a shot that I should have had, but missed! Eileen yelled she found another lobster and said she saw it crawl into a hole. I dove down but the hole was empty. She went down to look but right then I saw him walk out the backside of the rock. So I dove down after him. I calmly took this large one just walking across the ground.

After swimming him back to the boat and on my way back out, I ran into a Nassau Grouper next to the dinghy. So I nailed him quickly and put him in the bucket.

Exhausted, I swam back out the cut to where Brown and Eileen were still trying to find another lobster. We must have spooked the reef with all our activity as the lobsters were not being found anymore and a barracuda has decided to hang around. We were all wiped out and decided to call it a day. Brown speared a lionfish on the swim back.

Back at “Blown Away” we cleaned our catch and planned for dinner. I had a great evening on Blown Away with grilled lobster, Lionfish and the Nassau Grouper. Eileen and Brown were great hosts. You can go check out their YouTube at Sailing Blown Away.

With another wind shift, Racoon became rolly again. So I said goodbye to Blown Away as they were headed North with a few other boats. I decided to head back to Double Breasted Cay.

The lobster season was coming to an end, and a freezer still with lobster left, I decided not to go hunting on the last day of the season.

You still have to pay the taxman, even living on a boat. I was able to get most of my taxes done online, but one brokerage account would not let me log in. I needed some better internet and would have to leave the Raggeds and get to Georgetown to get better cell service and internet, to finish them up.