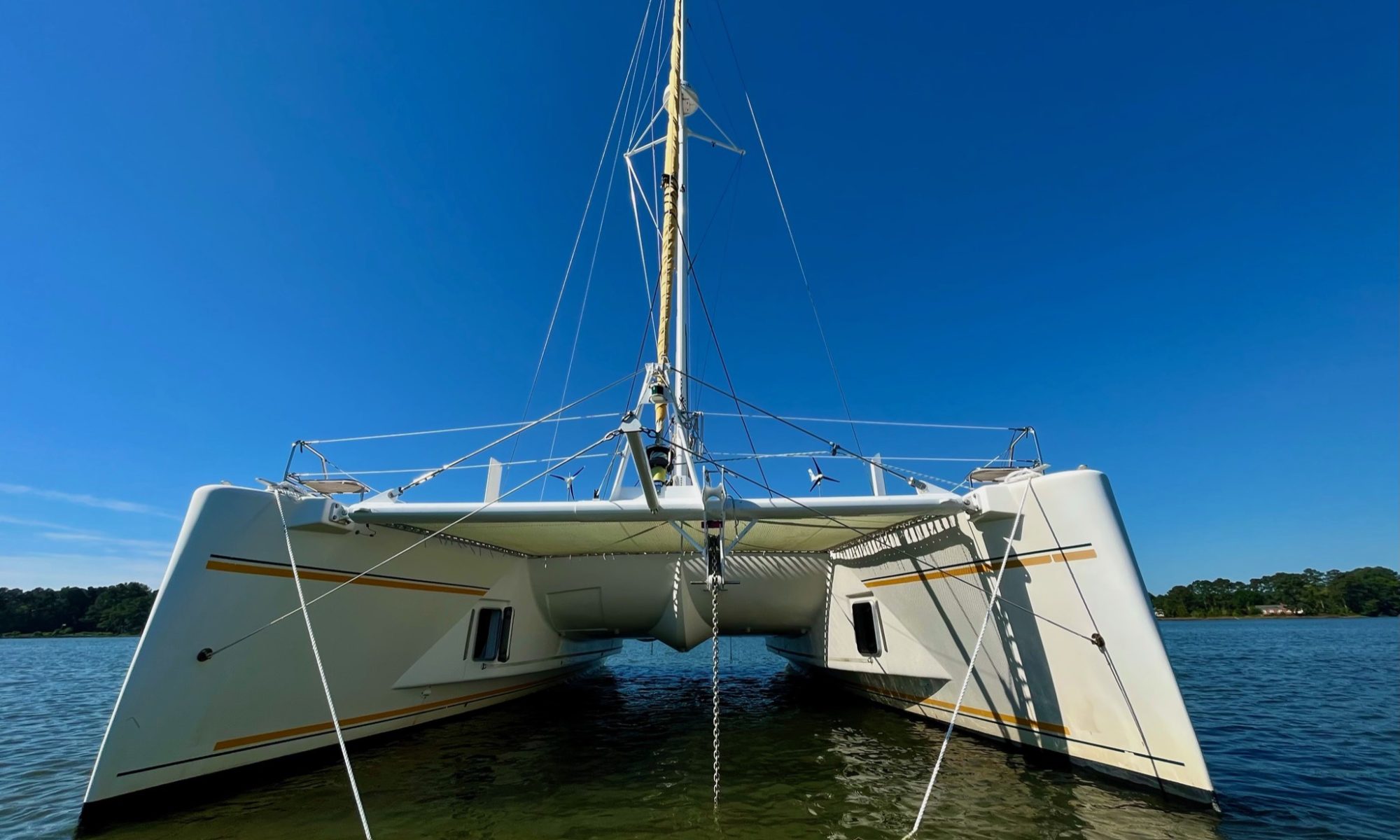 0700 ( 7 am ) Prepping Trouble for a long solo sail from St Augustine Florida, up to Norfolk Virginia. This passage is 562 nautical miles. I’ve estimated it will take 4 days. There is a low-pressure system around Cape Hatteras that I need to time perfectly. The system will move North, leaving light winds before they fill in again from the south, bringing strong thunderstorms.

Heading out the St. Augustine Channel was rough with the outgoing current against the wind. After clearing the channel I put the sails up and left one engine on and motorsailed as the winds were fairly light.

For most of the trip, I had one engine on. I had to keep my schedule as to round Cape Hatteras just as the wind died. Sometimes when the wind died, I would furl the genoa so it wouldn’t flap. But for the most part, I had both sails up and an engine on.

Trouble had full fuel tanks and this would be plenty for the trip. I was estimating I would use less than half my fuel.

My days are rather boring. There is not much to see, and I forget to take photos. I do a lot of reading so I have to make sure my Kindle is loaded up as I don’t have internet way out here. My sleep is in 20-minute nap cycles, then get up and scan the horizon and check on the boat. I make simple meals as no one wants to cook underway. Even though the weather is calm there are still waves and swells and the boat is bouncing around a bit.

Every 6 hours I download from my satellite phone (Iridium Go) the weather forecast. I need to keep a keen eye on the low front over Cape Hatteras. TIming the rounding of Hatteras was going to be critical.

As I was getting closer to the low front I knew the wind would shift a bit and be on my nose. I was expecting the wind to be light enough so that I could motor straight into it for a couple of hours, till it shifted south again and also where I would be rounding Cape Hatteras and heading more North to the Chesapeake.

The wind shifted rather quickly and I was not expecting the waves to shift onto my nose also so fast. This made for a very uncomfortable ride. The wind was also a bit stronger than I had hoped. I ended up dropping the sails and motoring hard into the waves and wind. I figured I’d have 4 to 5 hours of this till the wind shifted enough that I could get the sails up again. Unfortunately, it lasted 8 hours. Ponding into a headwind and waves for 8 hours is not fun.

At 1500hrs ( 3 pm ) the wind had shifted enough that I could sail. I could not point directly onto my course but I knew as the wind kept clocking around it would eventually put me back on course.

The wind started to build, and pretty soon Trouble was just bashing through the waves upwind going 10 knots. Trouble was going through the waves instead of over them. It was spray everywhere. While she seemed fine doing this I didn’t want to be stressing the boat and possibly breaking something this far offshore. Also, it was throwing off my timing for getting to Hatteras. I slowed Trouble down to a less violent speed. She was still making good time, but it felt safer. The ride was still pretty rough.

The wind slowly clocked around so Trouble and I were not bashing into it anymore and then the wind pretty much died right as I got to Cape Hatteras. So everything got timed perfectly.

Early in the morning as I was doing my 20-minute sleeping cycles, I heard a loud bang in my cockpit and then flapping. I got up and was looking around trying to figure out what broke and was flapping. As I peered out into red-lit cockpit, I saw a large flying fish flopping inside the cockpit. I have had flying fish on the deck quite often, but never have I seen one fly into the cockpit.

Flying fish can be smelly, so not wanting to get that smell on my hand, I grabbed some tongs to pick him up and throw him overboard.

Up The Outer Banks Of North Carolina

I rounded Hatteras just as the wind died and had shifted so it was completely behind me again. This made for a much better ride but with no wind I just motor sailed. There was a bit of a current against me, and I was not going very fast, but I also didn’t want to get to Norfolk and anchor in the dark.

The Outer Banks of North Carolina go on for a long way. While you feel like your on the final stretch it is a good 24 hours from Cape Hatteras to Norfolk.

Traffic starts to pick up with sport fishing boats and container ships. I even saw a few cab pot markers. I was not able to do my sleep cycle as much with all this extra traffic. The container ships are easy to track on the AIS, but the sport fishing boats, keep their AIS off and make it more difficult to be alerted of them. I’ve got better at using the radar to spot them, and it helped a lot during this passage.

The Chesapeake Bay Bridge-Tunnel is a busy place, as all marine traffic into and out of the Chesapeake has to go through here. There are two channels that Trouble can go through and both are what the large ships also use. I, unfortunately, was going to have to go through this in the middle of the night. I am on deck at the helm for a good 6 hours, as the marine traffic is all around me. The ones on the AIS are easy to follow, and I also know they see me, but a few don’t show up on AIS so I either have to try to track them with radar and or by their navigation lights. We were occasionally going in and out of some light fog so this was also disconcerting.

Eventually, all the fog lifted, and as I dodged and weaved my way around traffic and the Cape Henry Lighthouse, I could then see the Bridge-Tunnel. There was some activity on the AIS at the Bridge-Tunnel Channel, which I was going to use. It looked like dredging going on. Smaller boats like Trouble usually stay out of the main channel and use the auxiliary channels that run parallel on either side of the main channel. I wasn’t hearing andy VHF radio traffic that the channel was closed, so I proceeded ahead and just figured they call me on the VHF if it was closed.

A large ship came up alongside me in the main channel which looked like it was part of the dredging activity. He was huge and but he stopped right before the channel and let me go through. As I went by, I kept a nice distance from the dredging that was going on right in the middle of the Bridge-Tunnel Channel. No one called me on the VHF and I was being very mindful of keeping my distance. I did hear the dredging crew call another sailboat behind me and give them directions for going through the Bridge-Tunnel channel.

The morning light was just starting to show, as I entered Willoughby Bay in Norfolk. I did need to use my spotlight to find the markers. Large thunderstorms were expected in the afternoon. Willoughby Bay is not known for great holding of the anchor, so I took my time to get a good set. I put out a ton of chain. Then I went and got some good sleep till the thunderstorms came in. I had tried calling a few marinas earlier, but all were filled as it was the holiday week-end.

As the thunderstorms started to roll in I was getting a Tornato Watch warnings from the VHF weather channel. As the holding here had me worried I started the engines and had my storm anchor ready to deploy. Only one of the cells came over us and Trouble held fine on her anchor in 30-knot winds. The local Navy station did helicopter training throughout the storms. I guess they need that practice too.

The next morning I moved Trouble across the bay to Old Point Comfort. A few friends had recommended it and I thought I’d give it a try. There is an underwater cable marked on the chart to not anchor near. I think I anchored 3 times as I was not happy with my location to the channel and the marked underwater cable. I probably overthought it as later on as the anchorage filled up lots of people anchored near the marked cable. This was a very nice spot and they even had a dinghy dock for getting into the town of Phoebus, with a Food Lion not too far away. I got up early the next day to go explore all that.

A few days later Marc and Nancy from Mer Du Jour showed up and we hiked around Fort Monroe. They were headed to a marina the next day and I was going to head up to the East River close to where Trouble is planned to get hauled out for the season.